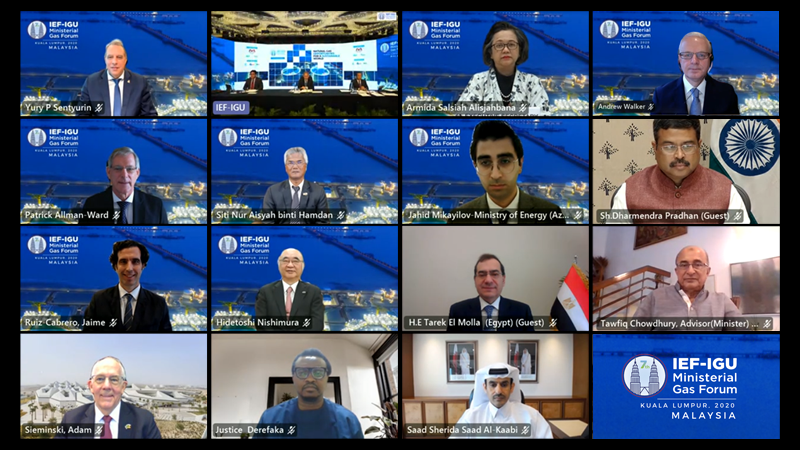 Kuala Lumpur, 3 December 2020: The ASEAN energy mix will continue to have a large percentage of fossil fuel, but the share of natural gas is projected to be higher than coal in the next decades. ERIA’s President Prof Hidetoshi Nishimura offered some policy recommendations in his remarks for the 7th International Energy Forum – International Gas Union Ministerial Gas Forum.

‘Competitiveness of various fuels in power generation differs across the regions. In the ASEAN region, coal is the most competitive fuel due to its abundant domestic supply. In order to further promote the role of natural gas in the region, cost competitiveness of natural gas needs to be further enhanced by such actions as accelerating removal of destination restriction, developing a reliable LNG price benchmark and regional gas pipeline interconnection,’ said Prof Nishimura.

He added that even though many countries announce net zero emissions goals, the Asian energy reality showed that the region is still dependent on fossil fuels. Therefore, Prof Nishimura suggested that decarbonisation should be the goal instead of elimination of fossil fuels.

‘For balancing fossil fuel use and decarbonisation, all the technology solutions including efficiency, electrification, hydrogen and CCS [carbon capture and storage] must be promoted. CCS/CCUS [carbon capture, utilisation, and storage] is particularly crucial in Asia due to its continuous high dependence on fossil fuels. Its role is relevant not only for coal but also gas use and hydrogen production from gas,’ he said.

The 7th IEF-IGU Ministerial Gas Forum was held virtually and hosted by the Government of Malaysia. Prof Nishimura was part of Panel Session 1 on Asia-Europe, the Middle East, and Africa—Opportunities in Growing Gas Markets: Producer-Consumer Perspectives on New Realities. Energy Ministers from Russia, India, Qatar, Nigeria, Brunei Darussalam, and Azerbaijan were also part of the panel, alongside industry leaders and head of international organisations.

Publication Digital Economy,digital innovation,Indonesia
Redefining Indonesia's Digital Economy
Editor(s)/Author(s) : Militcyano Samuel Sa 10 January 2023
The Indonesian digital economy is the largest and most attractive investment destination amongst the Association of(...)
Publication Indonesia,Global Economy Outlook,pandemic,COVID-19
The Global Economic Outlook and the (...)
Editor(s)/Author(s) : Ivana Markus,Pyan Am 10 January 2023
The global economy is facing a perfect storm as a result of the coronavirus disease (COVID-19) pandemic, prolonged(...)